My second novel, Carried Home, was released on Monday, April 27th, 2015.
About the book:


"The Caribbean is no place for a society lady of London, yet after a daring quest to save a friend, Lady Ivy Shaw finds herself trapped far from home. Now, driven with worry for her young brother, she is determined to return to England in all haste. So, when a new acquaintance offers to sail her to her brother’s side, she jumps at the offer, scarcely caring that the man is a privateer.

Captain Gage Thompson is just learning how to be a captain. He sailed for years under the command of his longtime friend, Caspian Archer, but serving a captain and being a captain are, as he soon discovers, two very different roles. While struggling to gain the respect of his newfound crew, he now faces the distraction of beautiful Lady Shaw. He finds himself entranced by her and promises to give her passage home.

After a brief stop in Port Royal, Ivy and Gage discover an abandoned child. They both decide to bring her with them on their voyage to England. But problems soon arise in the form of hurricanes and enemy pirates, and Ivy and Gage find themselves scrambling to not only care for a lonely child, but also gain command of a motley crew.

Will love bud between Ivy and Gage as they journey home? "
You can find Carried Home on Amazon, Barnes and Noble, goodreads, smashwords, and Astraea Press's Website

Here is a little blurb about it:
"Lady Eden Trenton never wanted to leave her privileged existence in London—until her father invites a dangerous suitor into her life. Left with few options, Eden devises the best reprieve she can: escape. Chasing freedom, she stows away aboard a pirate ship, praying she will gain her independence in the colonies before she is discovered by the nefarious crew.
Captain Caspian Archer has spent the last five years hardening his heart and searching to exact revenge for the event that tore his life to shreds. When he catches word that his enemy is residing in Jamaica, Caspian steers his ship toward the colonies in all haste. His plans soon change, however, when he discovers the young beauty hiding in his ship’s hold.
Cut from the only lives they have known, Caspian and Eden are pulled together as each pursues a fresh hope upon the sea." 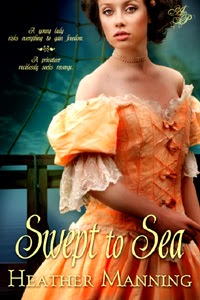 You can find Swept to Sea on Amazon, Barnes and Noble, goodreads, smashwords, and Astraea Press's Website.

If you have read and enjoyed Swept to Sea, please think about leaving a review on a site like Amazon...it might make a certain author's day! :)