Happy Halloween! Are you doing anything special today?
I am dressing up for Halloween...my yearbook staff is sponsoring a costume contest which I am excited for! I'll post pictures of my costume at some point.

So...I have been incredibly busy lately.

Last week, I got to go to Disney World, which was awesome. I went to all four parks and had an awesome time.


I also want to tell you that my TV feature for Fox Four's Reaching for Excellence award will air THIS Wednesday, November 5th at 9:00 PM. It will also re-air several times after that, and I will be sure to post the link for you to see it.

Finally, yet equally important, I wanted to tell you that Swept to Sea is CURRENTLY ONLY 99 cents! So if you buy it right now you would be saving $3. Sounds like a deal to me!
So, please consider purchasing Swept to Sea during this limited time if you have not already and sharing the deal with your friends. As I am writing this, Swept to Sea has reached number 38 on the Amazon Bestseller list! Let's see how far we can make it go! 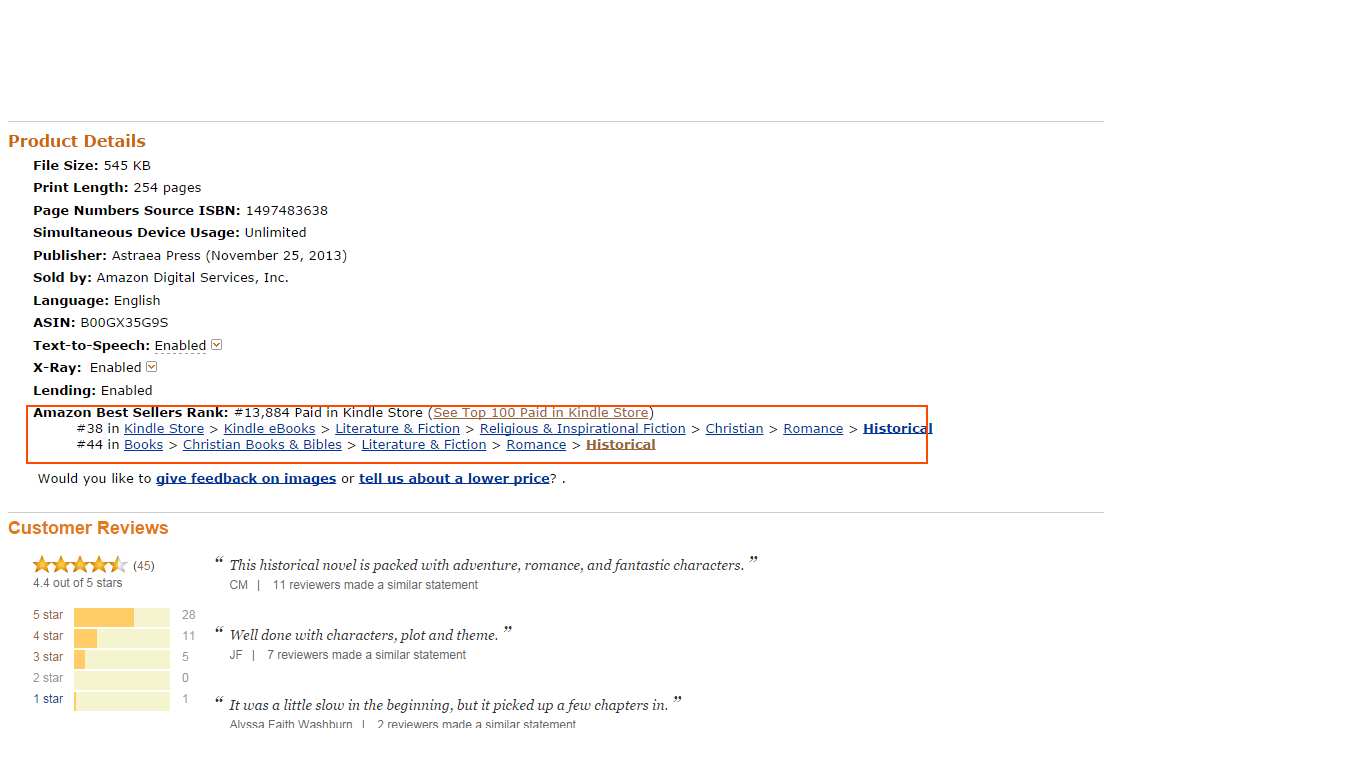 Peace I leave with you; my peace I give you. I do not give to you as the world gives. Do not let your hearts be troubled and do not be afraid.
John 14:27

Hey everyone! I just got done reading Abandoned Memories by MaryLu Tyndall.

Now, it is time for a review! But first, here's some info about the book.
"In MaryLu Tyndall’s stunning conclusion to her Escape from Paradise series, Angeline Moore longs to make a fresh start in the Confederate colony of New Hope, Brazil. James Callaway longs to create a city free from immoral women who caused his failure as a preacher. But a series of strange happenings soon lead the colonists to believe they have been brought to this place for a divine purpose."

Now, on to my review.
My Thoughts:
The Idea:
I have been following this series since the very first, Forsaken Dreams. This trilogy follows a colony of Southerners after the Civil War, who are sailing to Brazil to create a Southern Utopia. This book solves the mysterious events that plagued the colonists in the first two.
I was eager to continue the story with familiar characters.

The Characters:
This final book details the story of Angeline, a woman with a dark past, and James, a doctor who hates the sight of blood and has become the colony's pastor. I had seen their interactions in the past two novels and had been awaiting their story the entire time, and was not disappointed.

The Plot:
This plot definitely kept me intrigued. The entire series, I have been wanting to know what was going on with the mysterious occurrences that have been plaguing these colonists, so I was eager to keep reading! The romance between Angeline and James was kind of predictable, but I did not mind it that much.
The Setting:
All alone in the wilderness of Brazil? This definitely posed some challenges for the colonists, and made for a good story. The setting was unique and well done.

Overall:
A great read! I definitely recommend starting with Book 1, Forsaken Dreams, and working from there. You will be glad you did!
Posted by Unknown at 12:00 AM 4 comments:

Catch Up Friday: Am Reading!

Hey everyone!
Lately I have been catching up on my reading. I am kind of in a lull between working on projects, so now I have some peaceful time to READ!

I just finished Abandoned Memories by MaryLu Tyndall, and now I am reading The Westward Brides Collection, which is a series of novellas written by many authors. I am enjoying it so far.

Also, I wanted those of you who were wondering that my TV feature on Fox 4 is still going to happen. However, because the Royals (Kansas City's baseball team) kept winning and is now in the World Series, my feature has been bumped back a few times. I will let you know when it plays!

In the mean time, enjoy this photo of a blue fountain in KC, celebrating the Royals' success! 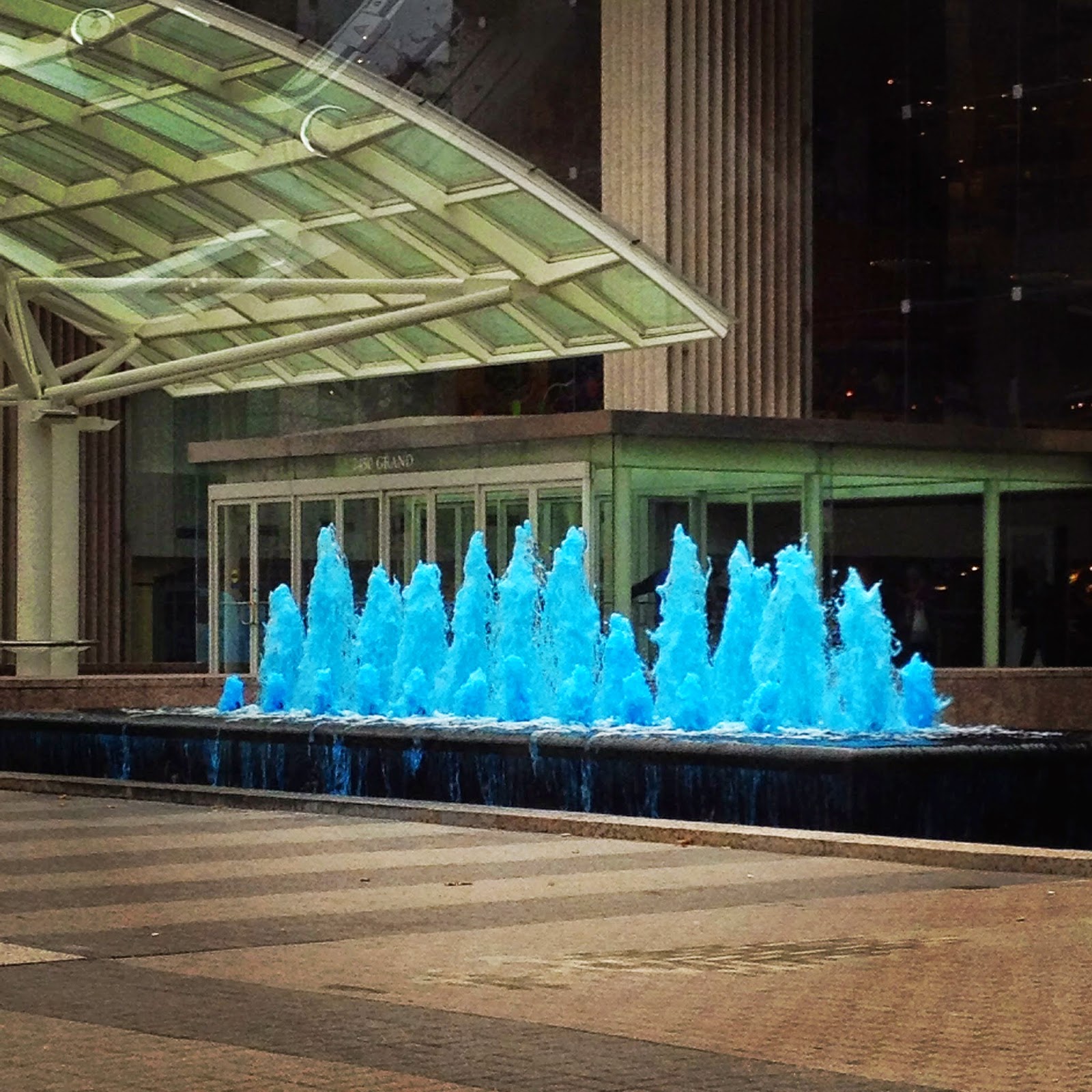 Hey everyone! I have a guest post for you today from one of my friends, Rachel Skatvold! Her novel Beauty Within, debuted recently and I am so excited for her! Take a look at her book here, and enter to win a copy of it! 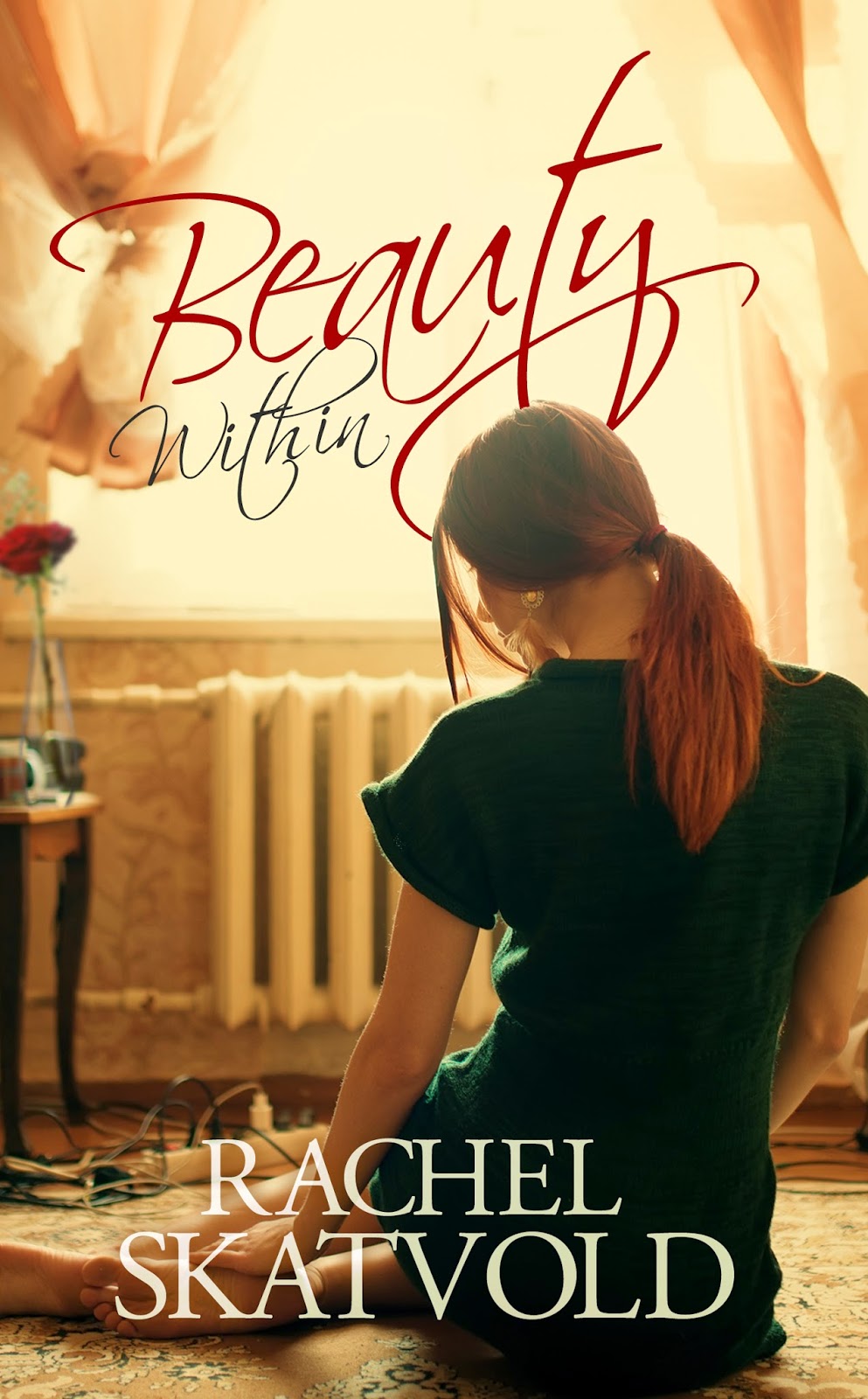 A young widow returns to her hometown in search of a new beginning…
A handsome police officer running from dark shadows in his past…
Together, will this unlikely pair be able to move past their circumstances and discover the Beauty Within God’s plan?

Officer Ryan Hudson watched the young woman’s face blush cherry red when she recognized him. He was just as surprised to see her again but didn’t let on. Instead he remained stone faced and all business. “Good afternoon, Ma’am. I’m Officer Hudson.”
She pushed a few strands of brown hair out of her face and shook his hand. “I’m Katherine Arnold.”
The natural blush on her cheeks brought out the red highlights in her hair. It made her even more beautiful than at their first meeting. He cleared his throat and attempted to concentrate. “I’m assuming you’re this child’s mother? I found her crying over here by the bakery counter.”
She bit her lip and squeezed the little girl’s hand tighter. “Yes, thank you for finding her. I assure you, this will not happen again.” She peered down at her daughter. “Right, Lillian? You’re going to stay with me next time?”
Lillian nuzzled closer to her. “Yes, mommy.”
Katherine nudged her daughter. “Don’t you have something to tell Officer Hudson?
She peeked up at him with a sheepish grin. “Thank you for the cookie, Officer … Handsome.”
Katherine covered her mouth but a giggle still escaped. “Sorry, she has a little trouble with names.” 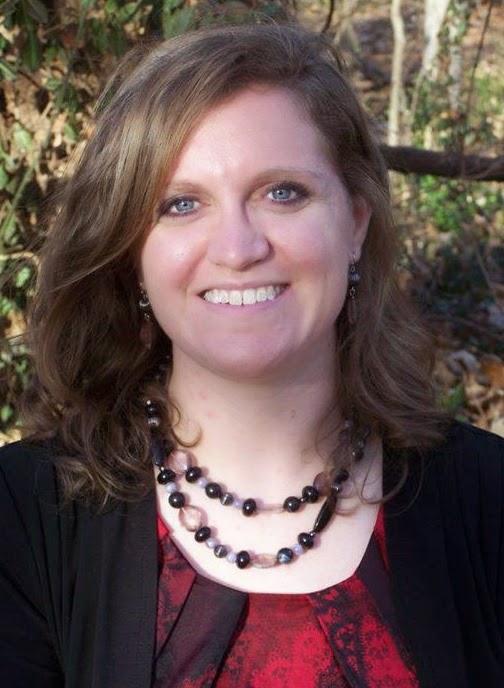 Rachel Skatvold is an inspirational author and stay at home mom from the Midwest. She enjoys writing inspirational romance, devotions, encouraging blogs. Rachel is currently working on the second installment of the Riley Family Legacy Novellas and her first full length novel, Enduring the Flames. Other than writing, some of her hobbies include singing, reading and camping in the great outdoors with her husband and two young sons.

Catch-Up Friday: A Week of Homework...

Hey everyone! I have been super busy with homework all week. Especially physics and math homework. Ugh.

Did you take physics in school? Did you like it or dislike it?

This weekend I am also really busy. Yesterday I went to an event called Waterfire Kansas City. It was an outdoor event on the Plaza where local performers sang songs from this year's show season. I got to hear everything from The Book of Mormon to Violet to Fiddler on the Roof and many in between. This was awesome. I am so proud of Kansas City's theatre scene!

So, what are you doing this weekend?
Posted by Unknown at 11:19 AM 1 comment:

Hey everyone! I am so sorry that I have neglected the blog lately, but I am here to tell you what has kept me so busy.
Last week, local news station Fox 4 News came to interview me. This was part of their Reaching For Excellence Award. I had an absolutely great time and can't wait for it to air in a few weeks. I will post a link when they put it online as well.

Also, I was part of the Maranatha Book Fest this weekend. This was really fun for me, since I love doing author events. I signed copies of Swept to Sea and also spoke to a group there about what it is like being a teenage published author. I also gave advice for writers who are starting out. I love doing events like these and hope to do more in the near future.

And finally, I have something pretty awesome for you. The extremely talented Monica over at Novel Characters illustrated some of my reader's favorite scene from Swept to Sea!

Make sure you stop by her blog and tell her how amazing the artwork is, but until then, I will share it with you here. Please stop over and look at her blog too, though. :) 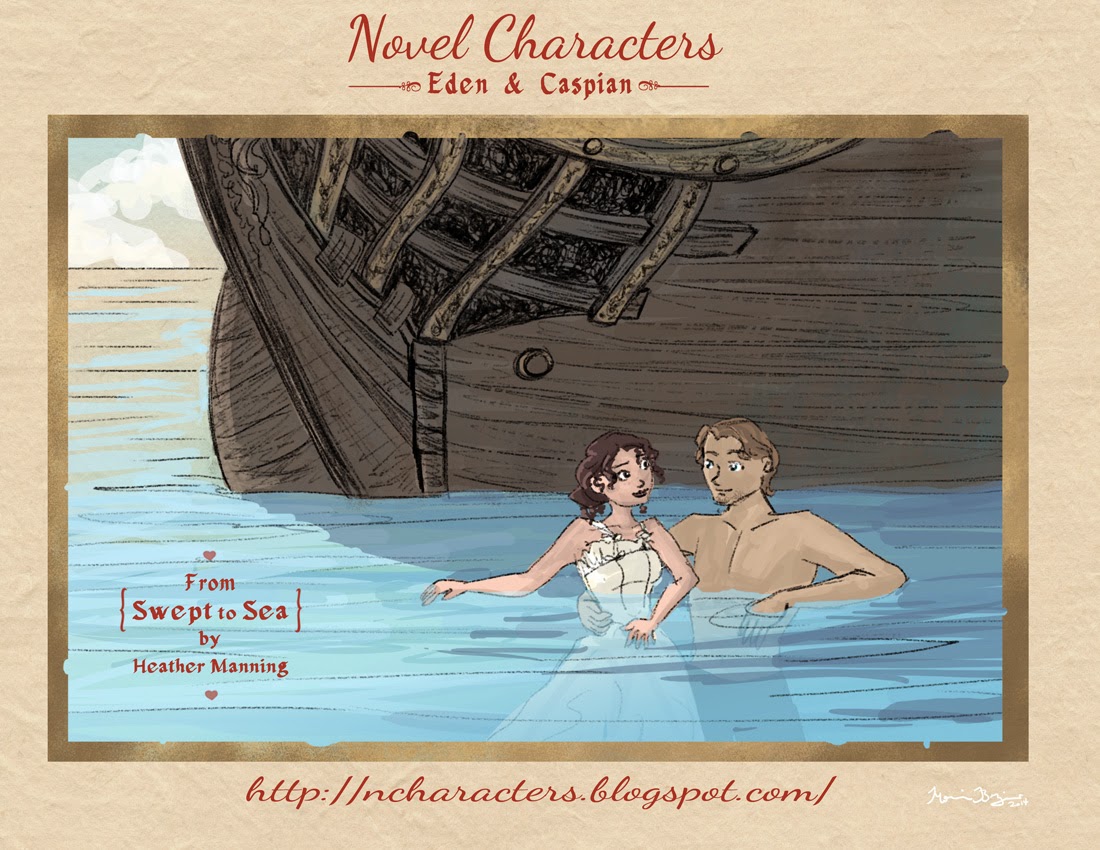