Hello, everyone! This weekend I got to see the musical The Mystery of Edwin Drood. Now, if you aren't familiar with the musical, it is based on the novel by Charles Dickens. This book was sadly unfinished by the time the author died.
So, how was a musical made of this unfinished mystery, you ask? The musical has multiple endings. The audience gets to vote for which character is the the detective, which is the killer, and which two are lovers.
I really, really love this idea. It is interactive and keeps the audience and actors on their toes. 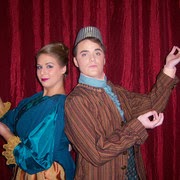 My favorite two characters were Neville and Helena, brother and sister from some exotic middle-eastern country. They were absolutely hilarious.
Anyway, here is a compilation of some of the songs from the entertaining show. By the way, Stephanie J. Block was in the production you are seeing in the video! How cool is that?