In the last two weeks you learned about my main character Lady Eden Trenton, and even got to interview her.

Today, you will learn about my male main character, Captain Caspian Archer.

You may remember that Eden stows away aboard a pirate ship ... well, that ship she stows away on belongs to Caspian!

Caspian has dark, almost black curly hair that falls down just below his chin. His eyes are a light, clear crystal blue and his skin is tanned dark from years working on the decks of his ship. He is about twenty-four years old. 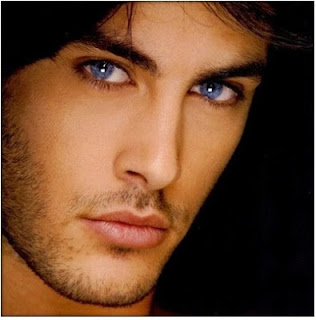 He has a five year old son, Reed, and he is the captain of the privateer ship, Dawn's Mist.

Caspian has spent the last five years of his life searching for the man who  murdered his wife in a battle at sea. He wants to exact revenge and then continue ridding sea of pirates since he is a privateer. He will stop at nothing to kill the man who wronged him.

Caspian is a born leader and his crew respects him. He hates not being able to protect those who he cares about, and he worries if he is raising his son right without the boy's mother.

He was raised in the American colonies and his mother died at a young age. He grew up with Henry, his older brother, and Gage, a boy who his family took in and who is now his first mate. Caspian's father has always been harsh with him, and was displeased with his dreams of a life at sea. He married Isabelle at the age of eighteen and she died shortly after. He is convinced her death was entirely his fault, and he has not forgiven himself for not being able to protect her.


So, what do you think of Captain Caspian Archer?

I would like to interview him next week like I did with Eden last week, so please post a question or multiple questions for him to answer next week! Thanks, and have a great weekend.